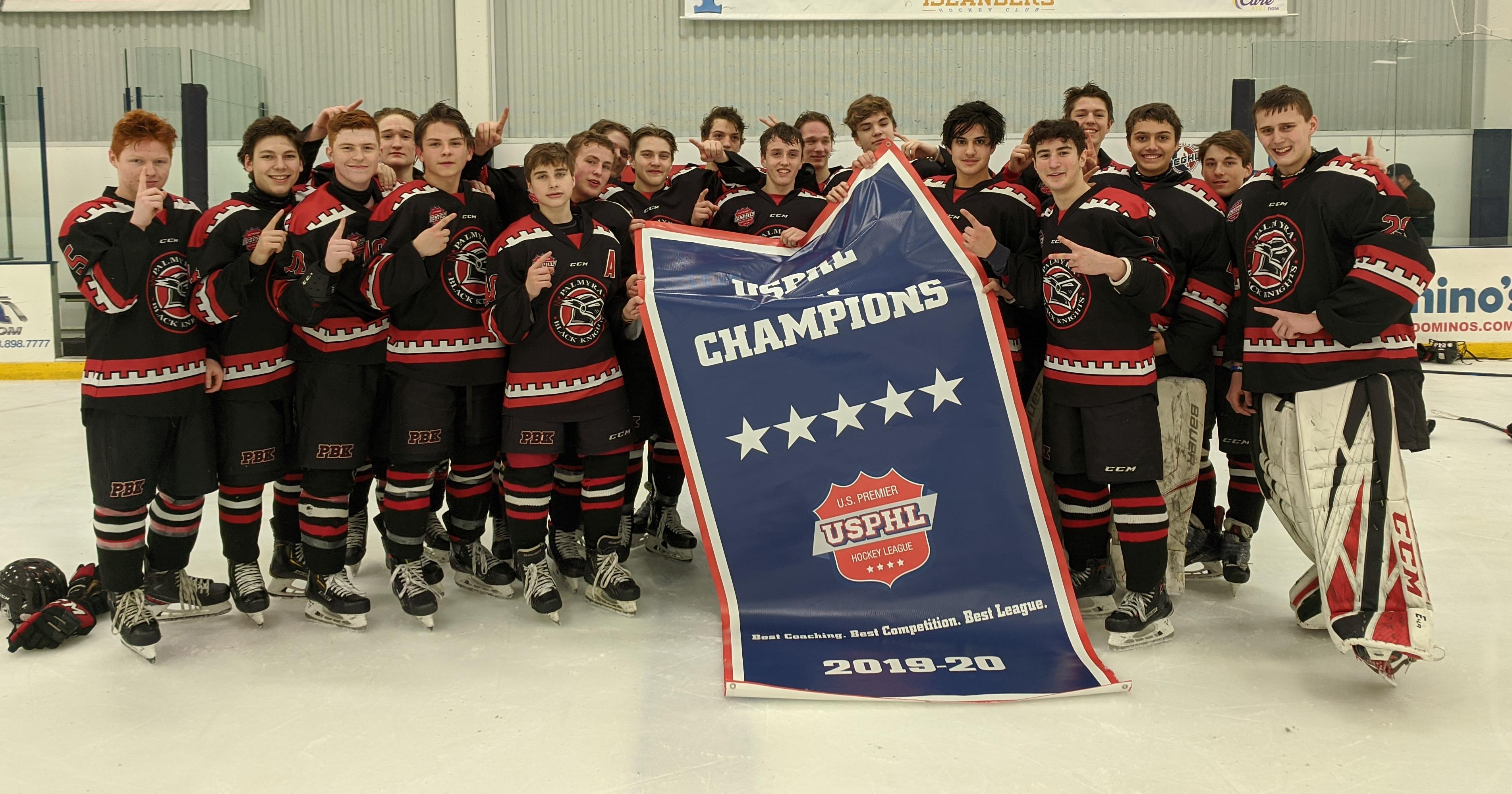 Opportunities always abound at the USPHL NCDC Combine Series, which has been run since 2019 to offer players the chance to skate in front of Tier II National Collegiate Development Conference coaches in Chicago and Detroit.

The knock on the door was loud and clear for Las Vegas native Ian Williams, whose performance at the Combine was so impressive that he was able to sign an NCDC Tender at the event, guaranteeing himself a spot at the Connecticut Jr. Rangers’ Main Camp and finding a spot on their 70-Man Protected List, which includes players certain to make the 2022-23 roster plus future prospects for coming years.

Williams, a 2003-born native of Las Vegas, Nev., was certainly happy with his choice to go to the USPHL NCDC Combine this year.

“I learned about the USPHL NCDC Combine series by looking up the NCDC camps online and saw the one in Chicago. I thought it would be a good opportunity,” said Williams, who attended the Chicago Combine held at the Fifth Third Arena in downtown Chicago, Ill., a facility that also serves as the Practice Home Of The Chicago Blackhawks.

“I had a positive experience at the combine. I got a lot of ice in and also some off-ice work,” he added. “The off-ice portion of the Combine was a nice addition to the usual game setup of combines and provided another opportunity to excel and stand out.”

The off-ice part of the Chicago Combine was run by Paul Goodman, who is the Blackhawks’ Strength and Conditioning Coach and also runs the Goodman Elite Training facility on the premises.

It was after his third of three guaranteed games at the Combine that Williams was approached by Connecticut Jr. Rangers Head Coach Jim Henkel.

“He approached me after my last game at the camp,” said Williams. “My individual performance at the Combine was good. I felt I played pretty well and I think my confidence and skills from the past two seasons developing in Wenatchee (not only with the U18AAA team but also with the time I spent participating in the BCHL practies) helped me stick out to the Connecticut staff.

“I thought it was a great opportunity and I enjoyed the camp a lot,” added Williams. “There were numerous scouts and coaching staff from all over the USPHL and NCDC in attendance, which is why you go to these things.”

Watch for the announcements for the 2023 USPHL NCDC Combine series in February 2023.

This past week, NHL Central Scouting released its Final Rankings for the 2022 NHL Entry Draft, which will be held July 7-8, 2022, in Montreal, Quebec.

This will be the first public draft since 2019, with the 2020 and 2021 Drafts being held by conference call and the results broadcast on TV, all due to the COVID-19 pandemic.

The National Collegiate Development Conference has had a direct effect on the interest in many players on the Final Rankings, especially the 40th and 71st-ranked skaters - former Boston Junior Bruins Cameron Lund and Jackson Dorrington, as well as the No. 7-ranked goaltender Cameron Whitehead, formerly of the Utica Jr. Comets.

Lund and Dorrington were a forward and defenseman, respectively for the Boston Junior Bruins during the 2020-21 season. Whitehead suited up as a goaltender with Utica Jr. Comets in what shaped up to be a very unpredictable year in that same 2020-21 campaign.

Despite the many health issues and restrictions that season at the height of COVID-19, each of the above-mentioned players played a full season of better than 40 games in accordance with local regulations, and with a strict league COVID protocol. The NCDC was one of very few leagues in North America to put together a full regular season mostly aligned with its planned schedule, in order to showcase its players and avoid losing a year of visibility and exposure.

A big part of these efforts to keep players on the ice was the USPHL creating the Hub City Tampa Initiative, bringing all the NCDC teams (in addition to Premier and Elite teams that elected to join in) to Florida to play within a closed community concept. Players shuttled only between a closed condo resort and the rinks at which they played.

These players were also part of the NCDC All-Star Events held during Hub City Tampa in January and February of 2021. At the All-Star events, they played in front of NHL scouts, including the NHL Central Scouting Senior Manager David Gregory. Even before they stepped on the ice for their first USHL games in 2021-22, Lund and Dorrington were already on Draft Watch Lists for 2022 due to their efforts in their NCDC season of 2020-21.

Here is a full breakdown of all the USPHL talent - current and former - that received Final Rankings for the 2022 NHL Entry Draft.

Silverstein (‘04/Calabasas, Calif.) helped the Islanders Hockey Club win the USPHL 16U National Championship in 2019. During the regular season, he played 13 games and went 10-2 on the season. He played for the U.S. National Team Development Program in 2021-22, earning a Silver Medal at the World Under-18 Championships.

Muszelik (‘04/Long Valley, N.J.) never lost a USPHL game in his time in the league, going 8-0 in the regular season and 2-0, all as a true 15U player (the Rockets 15U team played as the Rockets HC Black team in the USPHL 16U American Division in 2019-20). The University of New Hampshire recruit played for the U.S. National Team Development Program’s 18U squad.

Whitehead (‘03/Orleans, Ont.) gets another shot at the NHL Draft, as he was among those listed in the Final Rankings for the 2021 Draft. Whitehead was the clear No. 1 for the 2020-21 Jr. Comets, as he played in 29 regular season and two playoff games for the campaign. He tended nets for the Lincoln Stars of the USHL.

This 2004-born native of Pembroke, Mass., was part of the Advantage’s 16U team that saw four regular season games and three more playoff games in a COVID-shortened Midget season. The longtime Advantage product won four of his seven USPHL appearances, including two in the playoffs.

The 2003-born native of Riga, Latvia, suited up for the Florida Eels of the USPHL Elite during the 2019-20 season, tending the Eels net for 17 games and posting a 2.52 goals against average and a .924 save percentage. He currently plays for HK Riga in Russia’s MHL.

The 2004-born Lund grew up in Bridgewater, Mass., and played youth hockey for both the South Shore Kings and Junior Bruins. Years later, he would be a major cog in the machine for the 2020-21 Junior Bruins NCDC team, from which he committed to Northeastern along with teammate Jackson Dorrington. Last season, Lund posted 17-17-34 totals in 40 games, and he added six more points in six playoff games. Lund is currently playing in the USHL for the Green Bay Gamblers.

Healey, a teammate at the Hlinka-Gretzky Cup of Jackson Dorrington and Cameron Lund, played in four USPHL 16U games, posting four points. He also played in two NCDC games. The ‘04 Hull, Mass., native is committed to Harvard University after playing for his current team, the USHL’s Sioux City Musketeers.

Dorrington, an ‘04, committed to Northeastern University while with the Junior Bruins last season. He played the full season for Mike Anderson’s squad, posting two goals and 18 assists for 20 points in 33 regular season games. He also added three assists in six postseason games as the Junior Bruins advanced to the NCDC Dineen Cup semifinals. He is currently playing in the USHL for the Des Moines Buccaneers, after playing for Team USA in the Hlinka-Gretzky Cup this summer.

A Nebraska-Omaha commit, the ‘03 out of Drummondville, Que., played in 12 USPHL 18U league games in 2019-20, posting a 5-11-16 line. He added an assist in three playoff games. He currently plays for the USHL’s Muskegon Lumberjacks.

The former USPHL 16U National Champion committed earlier this year to Rensselaer Polytechnic Institute. He split this past season between the Islanders organization and Kimball Union Academy, including a pair of NCDC games in which he scored one goal. He is committed to play for the Islanders’ NCDC squad for the 2022-23 season before moving on to Rensselaer Polytechnic Institute.

The USPHL wishes the best of luck to all of the above-listed players at the 2022 NHL Entry Draft.