Share
The Islanders Hockey Club, from North Andover, Massachusetts, lost their opener but never lost two games in a row during the entire season. They traded the league lead with the Jersey Hitmen and Boston Junior Bruins before ultimately coming out on top with a 36-8-0 record. 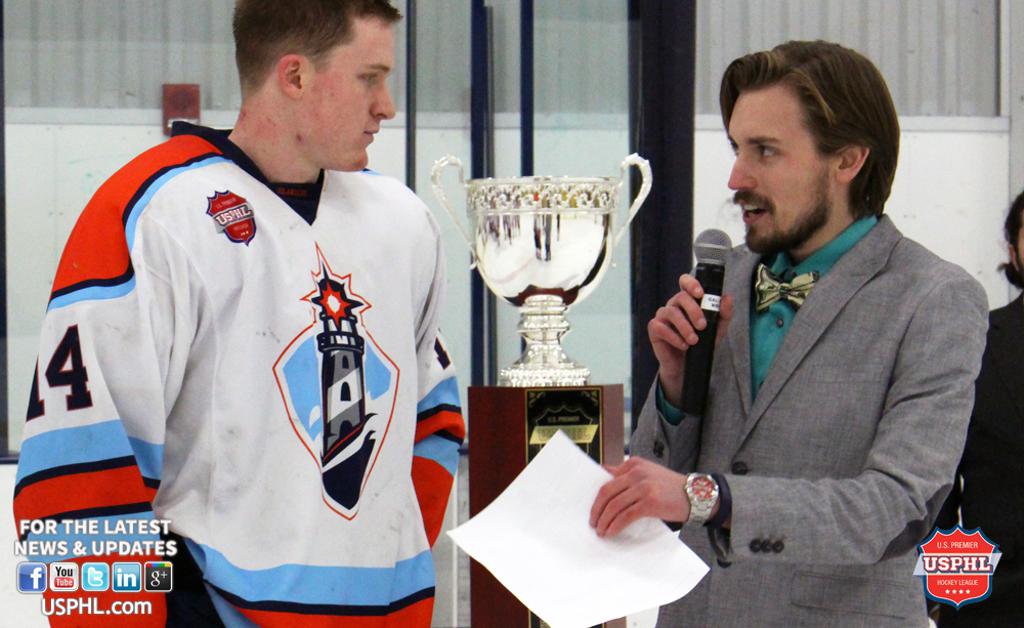 The team had a balanced attack with three 20-goal scorers and two goalies who posted nearly identical statistics. Anthony Tirabassi was 19-4 with a 2.25 goals-against average and .923 save percentage. Alex Connal was 17-4 with a 2.29 GAA and .924 save percentage.

Ace Cowens led the team in goals (21) and points (52). Brenan van Riemsdyk and Brendan Soucie added 20 goals each. Will Brophy matched van Riemsdyk for second on the team with 27 assists.

“This season’s team is one of the stronger I ever coached,” Islanders Hockey Club head coach Sean Tremblay said, according to a story on the league website.

MORE TITLES: The Pikes Peak Miners (34-5-1) edged the Aspen Leafs (34-6-0) by a single point to win the first Rocky Mountain Junior Hockey League regular-season title. The Miners beat the Colorado Rampage in a pair of 9-3 games this weekend to hold off the Leafs.

The New Hampshire Junior Monarchs went 34-8-0 to win the regular-season title of the Eastern Hockey League Elite Division, where all eight teams make the round-robin portion of the playoffs Friday through Sunday with two four-team pools.

STILL SCORING: League scoring leader Rem Pitlick from the Muskegon Lumberjacks is the United States Hockey League Forward of the Week for the third time this season.

Pitlick scored goals in all three games and added four assists. He has 15 points in nine games in February, giving him 30 goals and 28 assists in 58 games on the season. He also has the league’s longest goals streak (eight straight) and points streak (10 straight).

HOT GOALIE: Wisconsin Whalers goalie Ian Dvorak stopped 48 of 49 shots Saturday night to lead a 3-1 win over the defending NA3HL champion North Iowa Bulls. It was only the second loss of the year for North Iowa. Dvorak was making just his second start with the Whalers since being acquired from the St. Louis Jr. Blues at the trade deadline.

COLLEGE COMMITMENTS: Christian Mohs, the Minot Minotauros’ all-time leading scorer, has committed to Miami University of Ohio. Mohs, a 20-year-old from Andover, Minnesota, has 31 goals and 56 assists in two seasons with the North American Hockey League team. He also has franchise records for 20 power-play assists, 26 power-play points, three short-handed goals, five short-handed points and a plus-29.

Two other NAHL players were among those who recently announced commitments: New Jersey Titans defenseman Dakota Ford is headed to Clarkson University, and Aston Rebels forward Dean Balsamo is going to Bentley University.

Ford, a 20-year-old from Potsdam, New York, has nine points in 33 games for the first-place Titans. Balsamo, 20, from Plymouth, Michigan, is second on the Rebels with 19 goals and third on the team with 39 points.

Taylor Brierley, a defenseman for the USHL’s Cedar Rapids RoughRiders, is headed to Union College. Brierley has 15 points in 30 games.

Kevin Obssuth, a forward with the PAL Junior Islanders of the USPHL Premier Division, has committed to Canisius College. Obssuth came to the Junior Islanders after graduating from high school in Delbarton, New Jersey. He played in the USPHL U18 All-Star Game earlier this season and has 31 points in 27 USPHL games.

ONE-TIMERS: Trevor Hamilton is third among USHL defenseman with 31 points in 40 games, and he has five points with a plus-6 rating in the six games since being acquired by the first-place Lincoln Stars. … Alex Strand scored the winning goals on back-to-back nights to help the Bismarck Bobcats pull out consecutive 3-2 NAHL victories over the Minnesota Magicians. … Mike McPherson from the Boston Junior Rangers finished as the Eastern Elite leader in goals (50) and points (90). … The Metro Fighting Moose’s Nick Schlegel had a hat trick and an assist when Team Francis beat Team Mariconda 8-5 in the Metropolitan Junior Hockey League All-Star Game.