Share
Richmond Generals Forward Mike Chester ( 6'0 210 RW / LW RS 1995 ) Commits to Daniel Webster College for the 2016-2017 season. Daniel Webster plays at the NCAA Division 3 Level in the New England Hockey Conference      ( NEHC ).
Mke appeared in 41 regular season games for the Generals this year scoring 9 goals and adding 9 assists for 18 points while also registering 2 PPG , 2 PPA, 1 GWG, and 33 PIM. Mike appeared in 3 playoff games for the Generals adding 1 assist for 1 point with 4 PIM.
Coach Lyke on Chester , " Mike is a very strong,physical,heavy power forward that competes well in all 3 zones. He is tough to play against and has the ability to be an impact player on special teams in both Powerplay and Penalty Kill situations. He has excellent hockey sense to go along with a solid skillset. Mike is a leader both on and off the ice and will add and do so many things everynight that do not show up on a scoresheet for a team to be successful. Mike had a good amount of college offers for next season but settled on Daniel Webster  because he really liked Coach McCambly and being part of starting a new program and culture at DWC.
Coach Eric McCambly on Chester , " I am looking forward to having Mike Chester attend DWC in the fall as he is a solid two way player that is responsible in all 3 zones. Mike will help bring a nice physical prescence,leadership, and add depth in all areas at the forward position for us next year. "
Mike Chester on playing for the Generals . " Playing for the Generals organization was an outstanding decision for my hockey career. The Organization has not only developed me on the ice but showed me how important it is to be a leader and role model off the ice as well. All in all the Generals have prepared me for the next chapter in my hockey career playing NCAA College Hockey next year. "
Mike is the 11th college commit for the Richmond Generals this season. He joins fellow and former Generals Junior and Youth Players Tyler Weiss ( Boston University NCAA Division 1 2018), Patrick Giles ( Boston College NCAA Division 1 2018 ) , Mac Wiseman ( University of Connecticut NCAA Division 1 2019 ), Chris Caldwell ( Fitchburg State NCAA Division 3 ), Josh Larson ( Fitchburg State NCAA Division 3 ), Austin Hannaford ( Royal Military Colege Canadian Division 1 CIS ), Greg Ferris ( Sacred Heart ACHA Division 1 ), Thomas Godrey ( University of Alabama ACHA Division 1 ), Chris Hille ( Williston State College ACHA Division 1 ), Riley Biel ( University of Iowa ACHA Division 2 ). 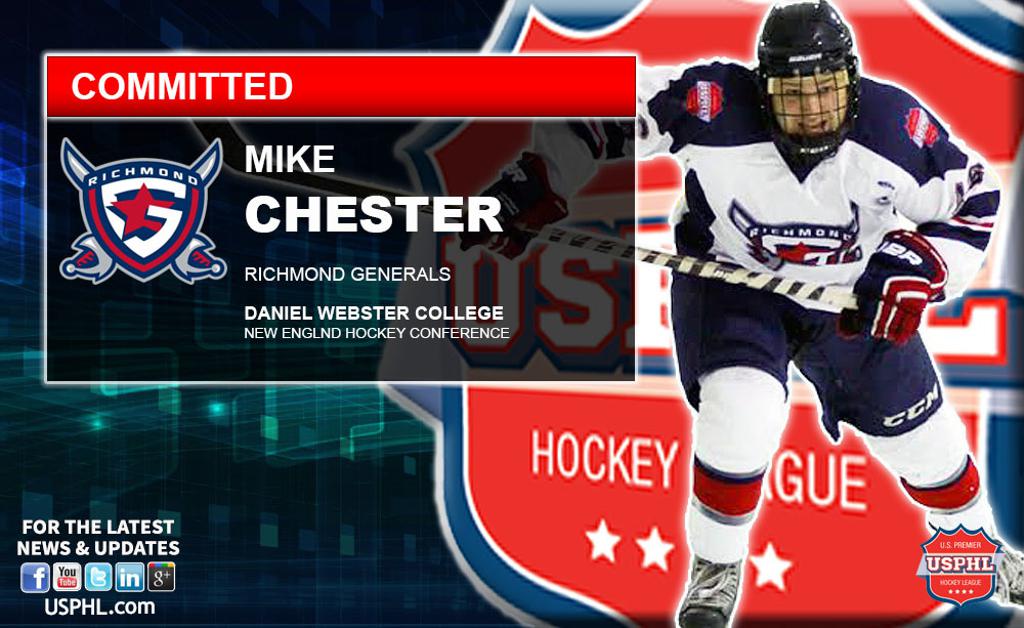