The University of New Hampshire received the commitment of Skipjacks U16 defenseman Lucas Bahn (Hendersonville, TN) on Saturday evening.  Bahn is now the 4th U16 Skipjack to commit to a Hockey East program during the 2015-2016 campaign, and for good reason (joining teammates Patrick Giles-Boston College; Mac Wiseman-UCONN; John Mulera-Providence).  The 1999 born defenseman led the Skipjacks Hockey Club on an incredible playoff run to the United States Premier Hockey League (USPHL) title game, and was rock solid at the blue line for the entire season.

Lucas continues to add to a long list of players to be coached by the Kersners to commit to the University of New Hampshire.  He will join last years U18 leading scorer Jason O’Neill (currently playing with the Langley Riverman, BCHL), recently graduated Forwards Nick Sorkin and Casey Thrush (both playing professionally), Senior Assistant Captain Maxim Gaudreault, and Junior Defenseman Dylan Maller.
"We are extremely proud of Lucas and excited for him and his family about this great commitment,” said Skipjacks Head Coach and General Manager Jason Kersner.  Bahn came to the Skipjacks from Tennessee, and we asked Bahn if he ever thought he would end up coming to play in such a competitive league in the northeast:  “I never thought I would be going away a few years ago, but I finally did, and I’m very grateful for the result.”  Kersner also added:  “Lucas is an elite person.  He brought great character to our team and exhibited leadership and a team first attitude every day at the rink.  His coach-ability and great work ethic made him one of the most improved players in our program this past season.  As a player UNH is getting an elite skater with a great competitive spirit and Hockey IQ.”
Lucas told us that he really enjoyed the recruiting process, learned more about UNH as an institution, and got a first-hand glimpse of college hockey.  Playing in the USPHL not only provided Bahn with the opportunity to compete at the highest of levels, but also to visit and meet some of the best coaches in college hockey due to the proximity of Hockey East schools with the USPHL and the Skipjacks travels.  “The future of playing for a great program, the best conference in college hockey, and getting a great education for after my playing days is very exciting,” remarked Bahn.
“Lucas will be a great defender in college because of his smooth and efficient stride.  He has a great feel for what the opponent is trying to do both at and away from the puck allowing him to put a stop to the opponent’s offense.  Although he is not a big defender, he plays the game very hard and the right way.  He brings many intangibles that aren’t found on a scoresheet and we believe he will help UNH compete for Hockey East titles.  We’re looking forward to helping him continue his development and watch his great career,” said coach Kersner.  Clearly, this young man is a huge contributor on the blue line for the Jacks.  As I followed the Skipjacks throughout the season from the press box, there were very few key situations where Bahn was not on the ice, whether that be power play or penalty kill, final minutes of the game, or being matched up against the opponent’s top offensive unit.
Bahn is excited to spend time with family this summer, however, the off-season will fly by and the 2016-2017 season will be upon us before you know it.  “This was by far the best season of my life, not only in the coaching, but the entire team was a family.  The amount of ice time and the competition was incredible.  The speed in the USPHL is almost double of where I used to play, and the skill level of all the players is very high.  This summer in Nashville I’m going to train very hard to continue to get bigger, faster, and stronger.  I’m definitely looking forward to coming back to play on the U18 club with the Skipjacks.  We have a great goalie coming back in Matt Kastein along with many other key players that is going to give us another great chance to compete for a championship,” Bahn concluded.
Bahn will no doubt be working hard over this upcoming off-season, and will be joining the Skipjacks U18 club for the 2016-2017 season.  Bahn will quickly step into the U18 lineup and make an immediate impact in the USPHL U18 division.   The entire Skipjacks Hockey Club congratulate Lucas, the Bahn family, and the hockey staff at the University of New Hampshire.
Edward Pendergrast
Skipjacks Beat Reporter
(Mr. Pendergrast can be reached through: mediarelations@skipjackshockey.com) 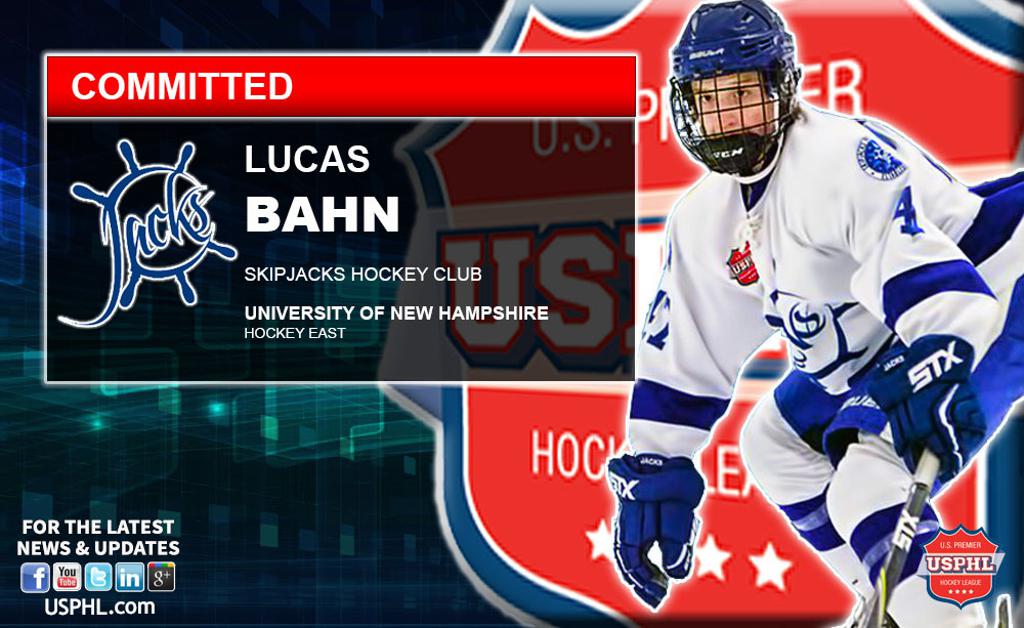