Share
Richmond Generals Forward Steve Mcelroy ( 6'0 175 RW / C 1996 ) commits to West Chester University . West Chester plays at the ACHA Division 1 level of play in the Eastern States College Hockey League ( ESCHL ).
The ESCHL is extremely competitive and is regarded by most coaches as the top college hockey conference at the ACHA Division 1 level.
Steve appeared in 44 regular season games for the Generals  USP3 team this season scoring 23 goals and adding 26 assists for 49 points with 24 PIM. Steve also appeared in 2 playoff contests adding 4 assists for 4 points with 2 PIM.
Steve was selected as a USPHL Southern Conference All Star and was the Generals leading point scorer on the USP3 team this season. Steve ranked 1st on the team in goals ( 23 ) , 3rd on the team in assists ( 26 ), and 1st on the team in points ( 49 ). Steve was also one of the Generals Assistant Captains this season as well.
Mcelroy on playing for the Generals ," I would like to thank Coach Lyke , Coach Hasenzahl , and Coach Podgurski for giving me the oppurtunity to play for the Generals this season. I am very proud to have played for such a successful organization that truly develops not only hockey players but young men. The overall expierence has helped me to mature and develop as a player, young man, and teammate. Playing for the Generals has truly prepared me for my next step in my life playing college hockey."
Coach Lyke on Mcelroy , " Steven has been a tremendous leader for our hockey club this season both on and off the ice. Steven is a very versatile player that can be used in any situation at any time on the ice. Steven's compete level, character, and work ethic are fantastic and thats what has made him so successful as a player , leader, and teammate this season. Steven has an excellent skill set , very good speed , and a quick accurate shot that makes him dangerous whenever he is on the ice. Steven also excelled on special teams this season especially the penalty kill where he was one of the best in the league in that area. I know Steven will be an excellent player and leader for West Chester University both on and off the ice .
Steven  becomes the 17th Generals' player to commit to a college for next season . He joins fellow and former Generals Junior and Youth Players Tyler Weiss ( Boston University NCAA Division 1 2018), Patrick Giles ( Boston College NCAA Division 1 2018 ) , Mac Wiseman ( University of Connecticut NCAA Division 1 2019 ), Chris Caldwell ( Fitchburg State NCAA Division 3 ), Josh Larson ( Fitchburg State NCAA Division 3 ), Austin Hannaford ( Royal Military Colege Canadian Division 1 CIS ), Greg Ferris ( Sacred Heart ACHA Division 1 ), Thomas Godrey ( University of Alabama ACHA Division 1 ), Chris Hille ( Williston State College ACHA Division 1 ), Riley Biel ( University of Iowa ACHA Division 2 ), Mike Chester ( Daniel Webster College NCAA Division 3 ), Peyton Norris ( Christopher Newport University ACHA Division 3 ), Corey Lasko ( Oklahoma University ACHA Division 1 ),Jake Switzer ( Concordia University Wisconsin NCAA Division 3 ) , Mason Corliss ( Morrisville State College NCAA Division 3 ), Mike Longhitano ( Oklahoma University ACHA Division 1 ). 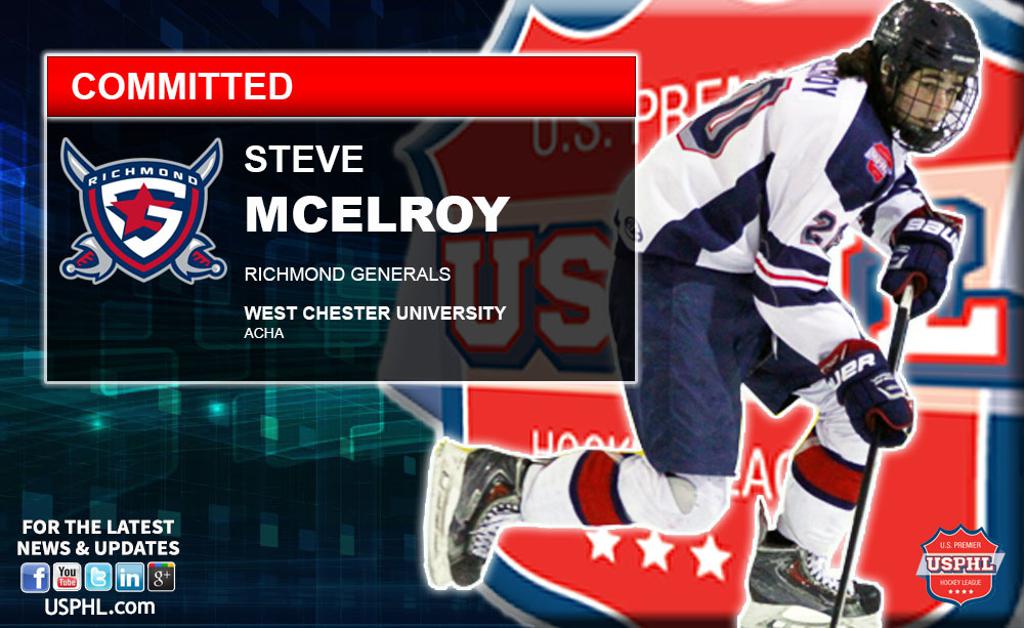