USA Junior Hockey Magazine - Why a Player Should Choose the USPHL

Share
Players have a multitude of options available to them when it comes to finding a team that will help them advance to college hockey.
The United Premier Hockey League (USPHL) is a proven feeder system for some of the best college hockey teams, both on and off the ice. The advantages of playing in the USPHL are considerable and its unique structure offers an experience unlike any other.

Charlie Coyle, seen here during the 2010 Junior National Championships as a member of the South Shore Kings, has seen his points totals rise in each of his first four NHL seasons with the Minnesota Wild. Photo by Nicole Goodhue Boyd
Exposure
Based along the Eastern Seaboard and the Great Lakes region, the USPHL as a junior hockey league is extremely accessible to NCAA and professional coaches, as the majority of NCAA Division 1 and 3 schools share this footprint.
The 40-plus regular season games, the USPHL Playoff Series, and the USPHL All-Star Classic give players ample time to impress recruiters.
All USPHL junior divisions host their playoffs in conjunction with the Beantown Spring Classic, which draws scouts from every NHL team and nearly every NCAA team in the Eastern United States.
Additionally, two teams in the Premier Division are coached by working NHL scouts. While the USPHL’s proximity to college and pro teams may not deliver a packed house, those in attendance at games and showcases are there to recruit.
Location
The USPHL is set up in a manner that removes travel time from the equation. Long bus rides have nothing to do with player development, and no player in the USPHL will have to contend with playing a game immediately following an overnight trip.
With all leagues and divisions concentrated in a small geographic footprint, the USPHL minimizes travel time to away games and causes minimal disruption to players’ schooling and training.
The extra time spent at home allows for better rest and recovery after games and more time to devote to school, family and life outside the rink. In addition, the USPHL’s footprint overlaps all of the major hockey hotbeds in America, meaning that players will enjoy a high-level playing experience without having to uproot themselves at a young age.
Development

Zac Lynch went from being a member of the Bay State Breakers to becoming the all-time leading scorer for Robert Morris University. After his final games in this, his senior season, he signed and played seven games with the AHL Portland Pirates. Photo by Joshua Boyd
USPHL organizations conform to USA Hockey ADM guidelines and have players staying within the organization from Mites to Juniors.
The USPHL itself sanctions leagues from the midget minor (16-and-under) age group through junior (20-and- under) hockey.
As a result, it is possible for a player to enter a USPHL program at the age of 14 and work with the same coaching staff until his last year of junior eligibility.
For example, while a player in one of the junior divisions may be sent to a lower division after missing games due to injury, this option requires less disruption to a player’s life than being traded, which forces a player to relocate to a different city, adapt to a new system, a new set of teammates, and to find a new school.
Furthermore, USPHL member teams demonstrate commitment to players as evidenced by the low number of trades and transactions throughout the season.
NCAA Eligibility
The USPHL is not simply a hockey factory. It aims to prepare players for all aspects of college hockey.
Players in the USPHL are not compensated in any way and the USPHL conforms to all NCAA eligibility regulations. Many players, even at the junior level, continue their schooling while playing in the USPHL to maximize their chances of earning a spot on a NCAA roster.
College placement is the ultimate goal of the USPHL and the league has become one of the top suppliers of talent for NCAA hockey programs in North America. In fact, multiple alumni find their way to Ivy League and service academy rosters each season after their junior hockey career is completed.
Success
The USPHL’s member teams have rich histories of moving players to the NCAA ranks.
Over 500 alumni of USPHL member organizations played NCAA hockey in the 2015-16 season.

Chris Wagner, who scored 92 points for the 2009-10 South Shore Kings, has been getting into more NHL games each season since starting in 2014 with the Anaheim Ducks. Photo by Nicole Goodhue Boyd
Rising stars such as Jack Eichel (Junior Bruins), Charlie Coyle (South Shore Kings) and Chris Wagner (South Shore Kings) played for USPHL organizations on their journeys to the National Hockey League.
Jimmy Vesey (South Shore Kings) won the 2016 Hobey Baker Award, presented to the top player in NCAA hockey, after finishing as a runner-up to Jack Eichel in 2015.
USPHL alumni Chris Dylewski (Tampa Bay Juniors) and Matt Vidal (Bay State Breakers) were awarded the Hockey Humanitarian Award and the Derek Hines Memorial Unsung Hero Award, respectively.
It is no accident the USPHL is considered one of the top leagues in North America for aspiring NCAA hockey players.
With everything the USPHL has to offer young hockey players, what more do you need? 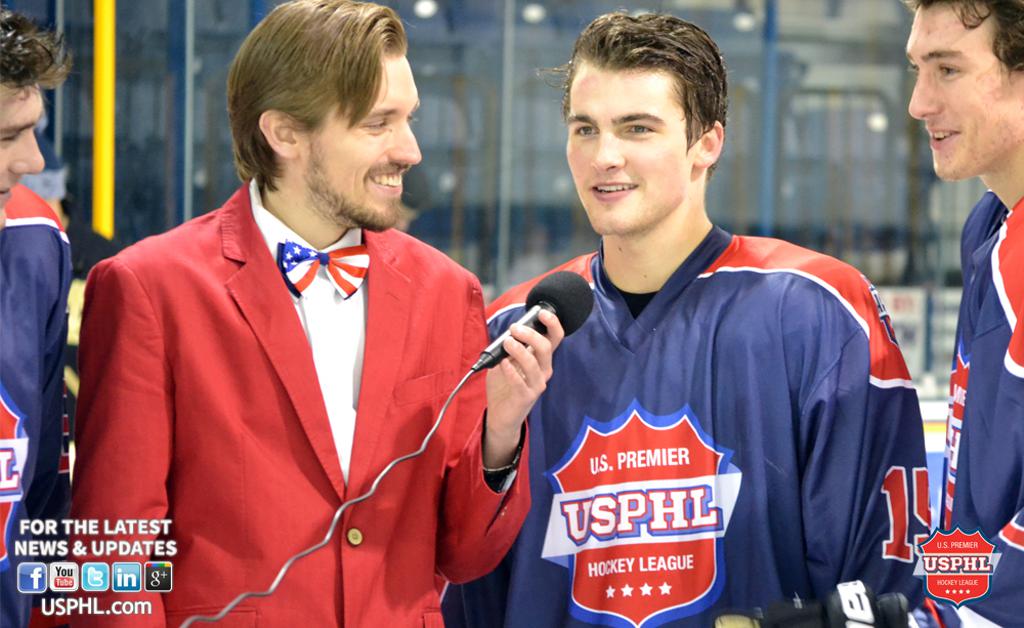