Share
The Florida Eels unravel the Palm Beach Hawks 11-3 on Monday MLK. To say the Eels were on fire would be the understatement of the year. No doubt all cylinders were working on over speed. This is no surprise to anyone who watches the Eels practice. That is how they train every day. Practice out of your comfort zone –over speed training. If you do this every day at practice it will come natural in games. The Eels actually had 111 shooting attempts. That is truly remarkable in any forum. They tallied 84 shots on the Hawks 2 netminders and netted 11 big ones. The Eels Elite team is polishing their game for playoffs right now. The Eels Coach Frankie Scarpaci Head is fine-tuning his team for their huge playoff run. He is also trying some new line combinations and some change-ups in their system as well, so opposing teams wont have a good read from history in how the Eels play. 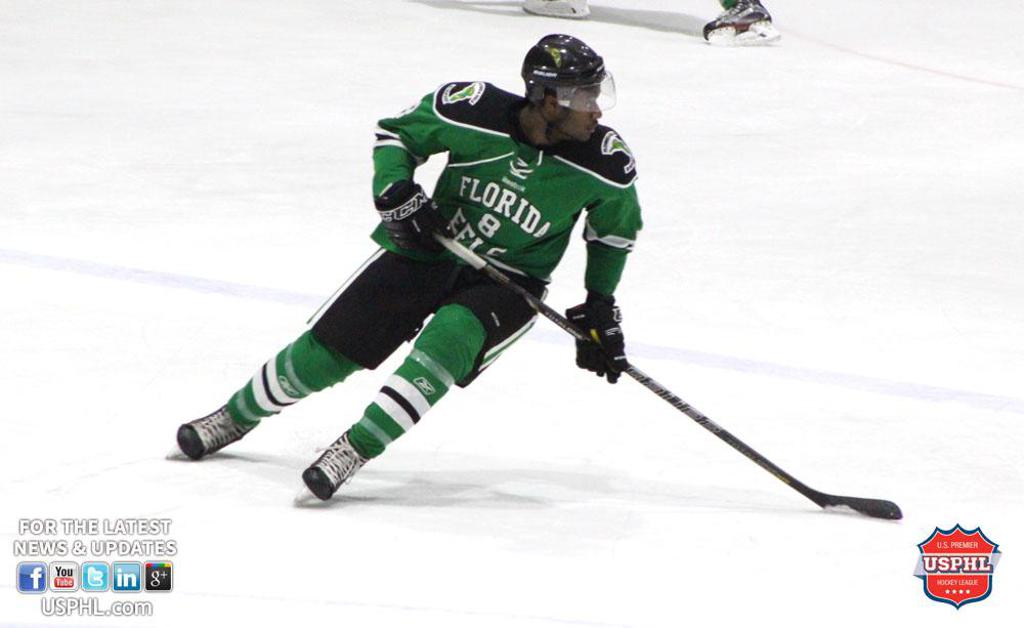 Assistant Captain and team leader in goals Zac Boyle notched a hat trick and now has 26 goals and 24 assists. This is 4 shy of topping the All Time Eels record set last year at 29 by Josh Delezeene who now plays for NCAA Div. 3 Westfield State University. Veteran Clayton Boyd showed tremendous speed as he does game in and game out and assisted on 3 huge goals. Boyd’s acceleration is so fast and explosive. He fly’s by opposing forwards with ease and completely dismantles their defense with his quickness.

Veteran forward David Stonebraker who has been on fire in the last several weeks scored 2 beautiful goals. One of his notches was a sniper that threaded the needle with very little daylight. The entire rink including the officials was in awe of that shot. The Hawks goalie never had a chance. You could literally see and feel the crush this had on the Hawks goalie’s confidence
Also dismantling the Hawks netminders with 2 goals was Nikita Lopatin with 2 goals and 2 assist. Lpoatin might have the hardest shot in the entire USPHL. Nikita is only a 1999. But plays like a 2-3 year veteran. In fact he really is a rookie. He is the USPHL’s version of the Russian Rocket. This kid already has 20 goals as a rookie. No doubt he has a tremendous future ahead of him.

Captain Jordan Court again laid everything on the line with his lion’s play scoring 2 goals and nesting 3 assists for a houseclean 5-point game. This guy has a heart of lion. But opposing coaches through out his 4-year tenure with the Eels hate to play against him. He never quits and does not know how to lose. He is a consummate competitor on and off the ice.

Veteran forward Mike Gennello garnered 2 key assists making key passes to fellow linemates. He plays that unselfish role driving to the net not caring who puts the biscuit in the basket but only is concerned that it goes in. Another dye hard competitor for the Eels.

On defense veteran defensemen Brandon Hotaling and Brian Kozek notches 2 assists while Nicholas Magill-Diaz tallied one with their outstandingly offensively and inside the D Zone. Additionally, Kellen Crowther was called up from the USP3 team and had a very impressive game with 5 shots on net and scored 1 goal Yes WOW. In net for the Eels was Nolan Greene who faced 26 shots turning away 23.

Complete scoring for the Eels was as follows: