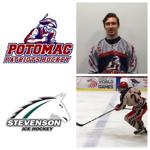 The Potomac Patriots Hockey Club is proud to announce that forward Chad Watt has committed to Stevenson University for the fall of 2018.

Watt, a Riverside California native, led the team in goals, assists points, PPG, PPA, and game winning goals for the 2017-18 season. He played in all 44 games for the Patriots Premier team, over which he posted 22 goals and 25 assists for a total of 47 points while also serving as the teams assistant captain.

"First off, I would like to thank my family for their continued support over the years. I would also like to thank Coach Vit, Coach Newton and the rest of the Potomac Patriots Junior organization for helping me reach my goal and helping me become a better player. Lastly, I would like to thank Coach Dawes for giving me the opportunity to play at the next level. Stevenson is a young program on the rise and I look forward to be able to contribute to their early success as well as help build the culture there."

"Chad made huge contributions to our program this past season through both his performance on the ice and providing veteran leadership. He has worked hard to continuously improve throughout the year, it will be exciting to see him playing at the next level in the fall at Stevenson," said Premier head coach Zachary Vit.

Stevenson (NCAA D-III) is a member of the United Collegiate Hockey Conference (UCHC). The Potomac Patriots would like to thank Chad for all his efforts since joining the organization and wish him the best of luck as he continues his academic and athletic careers.