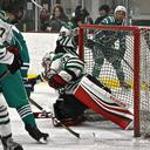 The Florida Eels are excited to announce our 4th college commitment  for this season and its overall 205th player to advance to college hockey.  Jeremey Hamerquist -1997 Commits to William Patterson University ACHA Division I. WPU is located in Wayne, New Jersey.

Jeremy is from Woodland Park, CO. He has been the Eels Elite top netminder all season. He is an exceptionally intelligent young man who had multiple choices for next season and weighed his options but felt that the academic and hockey program at William Patterson University   best fits his interest and is so excited to have chosen WPU.

Hamerquist has done a phenomenal job all season. He had spent some time with the Eels Premier team during the season as well. Hamerquist has been an excellent leader in the lockerroom.  Hamerquist had backboned the team’s success and has taken charge in their recent march to the playoffs.  He has good size.  HEIGHT:  5’10”; WEIGHT: 177 LBS., catches Left.  SCOUTING REPORT: Mature goaltender who does a good job in controlling the game.  Plays the puck well. Great vision. Great tracking the puck. Very quick glove. Butterfly style. Battles shooters. Very Vocal.

He is so much looking forward to becoming a Pioneer and playing for such experience coaches as coach Joe Balance and Assistant Coach Ian Michaelchuck. These coaches are amongst the Elite in college hockey. I am looking forward to their mentorship. Coach Ballance will be entering his 11th year as a collegiate level coach and his 9th with the William Paterson University Pioneers. During his tenure, Coach Ballance has led the Pioneers to five championships (10’,11’,12’,13’,16’), including four consecutive Super East Collegiate Hockey League (SECHL) Championships in row (10',11',12,13').  He has guided the Pioneers to the SECHL championship game in each of his 8 seasons as Head Coach. He also has led the Pioneers to 7 National Tournament appearances in his 8 seasons.

For the 2018-19 season William Patterson University has been elevated to ACHA Div. I. This is part of an exclusive club. There are only A total of 60 teams competing in Men’s ACHA Division I. This year William Paterson University Ice Hockey Team is to Represent Northeast as #1 Seed in National Tournament from March 15 to 19, 2017.

Hamerquist has a phenomenal work ethic.  He is often found at the rink 2 hours prior to practice working on his agility, dissecting games he played and upcoming opponents studying opposing shooters tendencies. Now that shows his determination and dedication. He is a player with a high compete level and will to win.  He will bring those intangibles to WPU hockey program and to WPU.  Jeremey and his family   have made enormous sacrifices over his youth and junior hockey career to help their son realize his dreams. Congrats Jeremy.